Ever since Thunder came back into work a few weeks ago, I have one thing on my mind with him: forward. It's been a struggle ever since I backed him, but I have the tools these days to deal with it so much better.

I was actually amazed by how much I progressed as a rider in the six weeks that Thunder was out of work. When I got back on him again, there was so much that I could actually fix - stuff that had been bothering me for years but that I just couldn't quite get sorted out. And now we're finally getting to a place where I'm much happier with him, and we're starting to touch on this amazing horse's true potential. 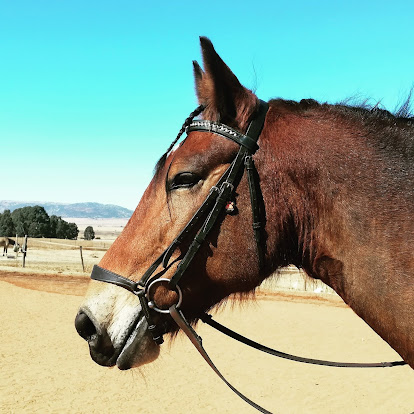 I did take my whip back, though. I generally don't need to do very much with it, except maybe a few touches at the start of the ride to reinforce my ever-useless right leg, but riding him only with the spurs was beginning to devolve into an argument. He will need to carry his own butt a lot more forward before we try that again. At any rate, I can pretty much abandon the whip somewhere near the middle of each ride, which is just fine; even at a championship show I'll be allowed to warm up with it.

As a rule, though, he has been SUPER forward for his past few rides and so we can finally move on. We've still been doing most of the EM/M movements (single flying changes, half-pass, shoulder-in, even started playing with canter to halt), but focusing more on the gait quality with each ride than the movements. He really learns the movements quickly, they're never a problem, but the quality of the gaits is something I really need to pay more attention to.

Last week I got him a lot more straight and forward than normal and let him grow up into the contact more as well (obviously I've been overbending him without knowing it - welcome to the struggle bus, y'all) and honestly he felt AMAZING. He felt like he grew two hands and started taking much bigger, more swinging strides as well. It was a pretty wonderful feeling. I don't think I've ever felt him trot like that before.

He's also so much more cheerful in his work now that I've made it clear that I'm not going to let him slop along behind my leg. Instead of arguing with my leg all the time, he understands what's expected of him and happily does as asked. In fact, he's positively enthusiastic about many things these days in a way that super-chill Thunder has never really been before. He LOVES his flying changes, especially when we play with the four-tempis, and even gave me a row of two-tempis recently. OK, so I was asking him to just canter down the centreline, but I couldn't exactly be upset about it regardless.

A big piece of the puzzle, I think, is physical fitness. I burned him out in late 2019 by schooling him every single day; he was fit, but it frazzled him mentally, more than I realized. Then I overcompensated by schooling him only three days a week, and sometimes missing a day here and there, and that was no good either. He just isn't fit enough to do what he knows how to do. Hacking is an absolute disaster on this animal (and not remotely relaxing for either of us), so at this point I've incorporated jumping back into his schedule once a week. He's a heavy dude and I have no interest in pounding his precious joints over big fences, but he does like doing his little gymnastics, and honestly it doesn't do me any harm to sharpen up whatever jumping skills I do have.

Another thing I need to work on is strengthening his left hind. He had a locking stifle on that side when he was younger; it hasn't locked for about two years at this point, but it's always his weaker side. He tends to twist his neck and lose impulsion in the shoulder-in left as a result, and struggles with really stepping over with his left leg, which makes his half-pass right a bit stiffer and less active than it is to the left. I think that some gymnastics will only serve to strengthen his hind end as a whole, as well as all the usual things I've been doing for his stifle for years - lateral work and rein-backs.

Now that things have opened up a bit, I'm also starting to think of his show calendar for the rest of the year. Gauteng Dressage Champs ended up being postponed to the end of November, but SA Champs is in September, and I will likely ride at least one of the Friesians there so I would like to take him as well. It all depends on how he feels. We have a lesson next week, so that will probably be the deciding factor.

In other news, working chronologically through the Bible continues to be fascinating and rewarding. I feel like I'm looking at these familiar words and stories from a whole new perspective now that it's all in historical context. I'm into the later chapters of 2 Chronicles and 2 Kings, and studying the prophet Isaiah at this point. Isaiah is an absolutely remarkable book, and it's astonishing how much Jesus actually refers to this book in the Gospels. One chapter that particularly struck me was Isaiah 5, in which God describes the unfaithful nation Israel as being His vineyard: He has tended it and protected it, yet it has yielded no good fruit (faithful people doing His will). Then, in the Gospel of John, Jesus calls Himself the true vine, and tells us that we are all branches abiding in Him. It absolutely gave me goosebumps to stumble upon that comparison in the Old Testament, showing us how the coming of Christ utterly transformed our relationship with God. In the words of C. S. Lewis, "The Son of God became a man so that men could become the sons of God."

He is just magnificent. God is good.

First, a Magic update. After a terrible, terrible weekend, he suddenly rallied on Sunday evening - so much so that the vets have been able t... 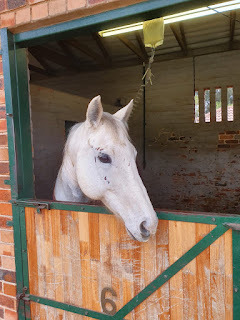