A Lady High and Valiant

The night of December 15th, 2021, I was bent frantically over the keyboard as usual, tapping madly away at one of the deadlines that come upon one like a train at that time of year. There was a storm brewing and I kept checking the time. At 7 pm, evening check, Arwen had had a little bit of wax. It took me a bit by surprise because her due date at her usual 345 days was only on December 24th; she was only 336 days. As always, she had absolutely no edema and no real belly to speak of, but wax is wax. Still, she usually waxes 48 hours in advance, so I wasn't particularly expecting a baby tonight. I thought I'd just check on her before bed, to be sure.

It was a good thing I did, too. It was 10:00 by the time I finished up. The storm was coming nearer, the night lit up from time to time by brilliance, but the air was still heavy and sweet with summer. In all of her moods, the Highveld is most unpredictable when she brews a storm.

The beloved and I hurried out. I was tired and had a long day of work ahead of me, too, so I just wanted to do a quick check and get back to bed. The power was out, and the stables were absolutely dark when we stepped inside. Lancey greeted me, as usual, and the air was filled with the quiet sound of horses chewing.

Arwen's stable is right at the end of the barn, on the left. When I reached it, I heard her happily chewing and decided that it was as I suspected - no baby yet. Then I heard scrabbling somewhere around my feet and turned on my torch, and there it was, a soaking wet little dark foal flopping madly in the shavings and making a spirited effort to get up. 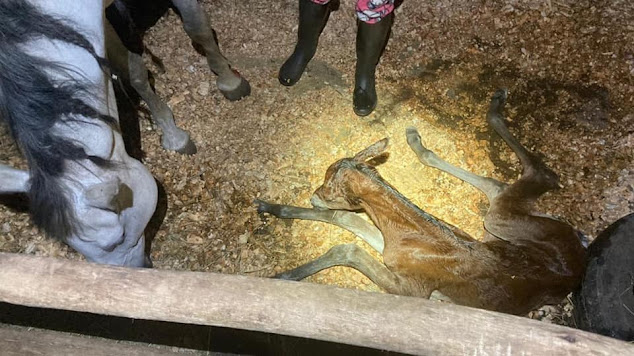 I jumped a mile. Arwen, who was unconcernedly eating her hay with the placenta hanging out, gave me a questioning look. There was some blood around - it seemed that she had either given birth standing up (while eating, knowing Arwen) or had gotten up a bit quickly straight afterwards and broken the umbilical cord a little early. Either way, she seemed as happy as can be, and the foal was snorting and flailing its little legs around in high spirits.

There was a cold wind blowing in through the open side of the barn and it had that restless quality that it gets when a storm is about to break. The foal was starting to shiver, and I dived to help, twisting a bit of clean hay into a wisp and doing a bit of rubbing. Arwen decided that this was now my problem and continued to happily eat her hay while I rubbed and checked the foal over. It was absolutely brand spanking new - couldn't have been born more than ten minutes before - and a beautiful solid bay filly without a single white hair anywhere on her.

I asked the beloved to rush home for some towels and off he went, and while he was gone, it suddenly began to hail. The sound on the stable roof was deafening enough that some of the horses got rather unsettled, but Arwen continued to munch on her hay, apparently bent on filling up her suddenly-empty belly. I scooted the foal to the other corner of the stable to get out of the cold wind and went on rubbing, growing more and more enchanted with the tiny filly as I did so. Her dish face was as pronounced as a baby Arabian's, and she had inherited her mama's enormous dragon ears.

The beloved returned in the car and shone the headlights into the stable. We both grabbed a towel and started rubbing, and the filly started to nicker and renewed her efforts to get to her feet. Once she was dry, I noticed that she seemed to be having a little trouble getting her right hind underneath her and straightening the tiny fetlock joint. When I took it manually it straightened just fine, but I was immediately worried. Very gently, I scooped her up in my arms - she was absolutely tiny - and set her on her feet. The right hind immediately straightened out, and she started to stomp around the stable in that mad, flailing fashion of brand new foals. 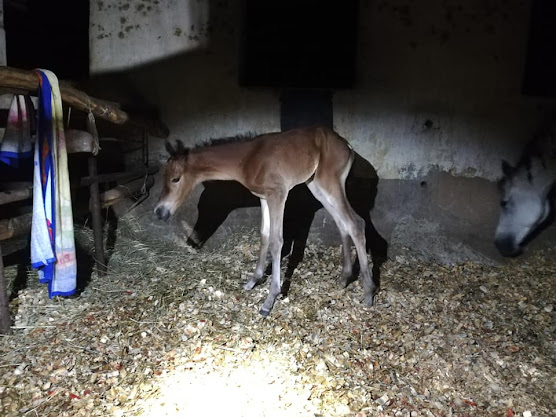 At this point, Arwen realized that it was time for her to take over, and she came up to the filly and started nuzzling her and nickering happily, pushing her in the direction of her udder. The filly, once up, showed no inclination of doing anything except suckling - on anything she could find: her mom's belly, the walls, me. With a little gentle guidance, she latched right on and drank like a champ. 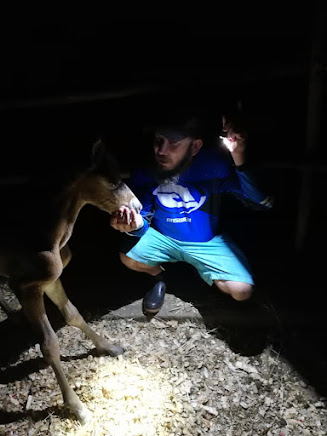 As soon as she'd had two very good drinks, the filly abandoned this quest and started parading around and around the stable. I've never seen a little foal stay up for so long right after birth - normally they seem exhausted after suckling and take a little nap. But Arwen's filly walked around everywhere, often bumping into me. Arwen had gone back to eating hay, pausing occasionally to shepherd her foal away from the walls, and didn't seem to mind at all that whenever the filly bumped into me I would do a little imprinting. 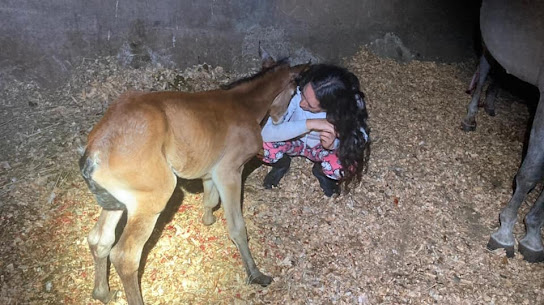 Eventually, the filly lost her footing and flopped over in a heap, then immediately started trying to get back up on her own. While all this was happening, Arwen lifted her tail, still eating hay, and expelled the placenta. Apparently not even third stage labour will keep Arwen away from her dinner. In similar spirit, the filly cheerfully passed her meconium around the same time. The two of them had hit all four major milestones within an hour of the birth. 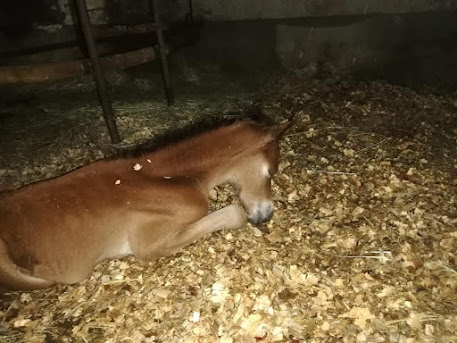 We stuck around until the filly had gotten up on her own and had a drink. By that time, it was one in the morning, and Arwen and the filly clearly had no further need of our assistance. I cuddled and hugged and kissed them both goodnight and we headed off through the pouring summer storm. 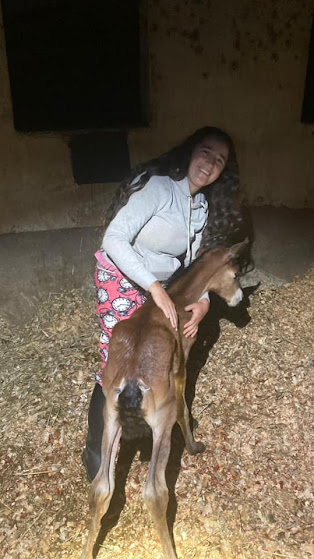 I'd already tentatively picked out a name for a filly from Arwen, which, in keeping with our Lord of the Rings theme, was Eowyn. When I saw the strong filly and all of her spirit, I knew it was the perfect name for her. Morning Star Eowyn it is. Known to friends as Wynnie, she's three weeks old now and growing strong, healthy, and wonderful in every single way - everything that I'd been hoping for.

Breeding so often goes wrong, sometimes catastrophically, sometimes with mild disappointment. While Eowyn and I are still at the very start of our journey, I know that so far, this has been nothing short of a miracle. We so nearly lost her when Arwen was sick in April. I was so happy that she just retained the pregnancy - never mind giving me a gorgeous filly that even came in the colour that I wanted.

A Lady High and Valiant

The night of December 15th, 2021, I was bent frantically over the keyboard as usual, tapping madly away at one of the deadlines that come u...