Thunder has been an absolutely wonderful gift in my life. The last horse I had that I trusted as much as I trust him was his mother, who was retired nearly eight years ago now. He's a real emotional sponge, too: he seems to soak up all of my drama without allowing any of it to affect him, whether that's my panicky nerves on a show day or just some general angst on any ordinary afternoon. There is so much that I love about him and every stride he takes is a miracle - but there is one thing that we really need to fix, and it's not his fault. It's mine.

Ever since Thunder was a youngster, he has been... an unresponsive soul, LOL. His Friesian blood has something to do with it, as does his doting upbringing. He just never had a reason to be reactive to random stuff. It makes him pretty bombproof, but it also makes him less inclined to actually react to my aids, and my riding has honestly not fixed it - although it has improved over the years.

Still, the one major flaw in his dressage work right now remains the simple fact that the horse just isn't forward and he just doesn't stay in front of my leg. And that's not on him. It's on me.

I've been making excuses for myself for years when it comes to his lack of response to my leg. I've told myself that his stifle is a little weak, and that he needs more days off, and more high-energy food. But the truth is that there is absolutely nothing wrong with Thunder. His stifle is the best it's ever been, his body is gorgeously sound and pain-free, and he's being fed like a king. He's been seen by a myriad of professionals and they all agree that he's a happy, sound, healthy, energetic horse. I can also clearly feel a difference between stiff or tired Thunder and just run-of-the-mill behind-my-leg Thunder, and I know that there is absolutely no physical reason why he doesn't go off my leg. The reason is simple: he doesn't move off my leg because I haven't taught him to do so.

At first I didn't teach him to get off my leg because I didn't know what that even was. When lessons with Coach first came along in late 2017, he massively improved - Coach didn't allow me to let him get too lazy. But we were also progressing so quickly and learning so much all at the same time that, while I was constantly working on getting him more forward, I never really dug in and just fixed the issue. There were so many other things to do.

Now, though, we're busy test riding EM 5 and 6 and Medium 1 and 2 as he grows fitter again after his long lay-off. It sucked not to be able to ride him for six whole weeks between the biliary and the sweet itch and a mild bout of colic (as a result of all the medications), but it definitely opened my eyes to just how wonderful this horse is - and also how badly behind the leg he is. After riding horses like Lancelot and Vlinder and Navarro for those six weeks, who have always had Uncompromising Firn and thus go forward when asked, I realized that my best horse still has a massive training hole.

This is also a hole that I don't enjoy fixing. It's no fun at all to have to lay down the law about moving off my leg. With the in-hand work, I've taken him back to the basics, teaching him to understand the whip as an aid instead of a punishment. But there is still an element of having to say to him, "Listen, my dude, get OFF my leg NOW." He knows what it means, he's just used to responding to a poke instead of to a light squeeze.

I've also made a crutch out of using the whip. As soon as I'm carrying the whip, Thunder is forward - almost without actually having to touch him with it. (Anyone else got a riding school pony for a Medium horse? LOL). Sans whip, he's a whole different horse. I don't like using a spur for forwardness, it exists for finesse in the lateral work, but I have got to start being more clear with my aids.

It's not about being more "strict" or "harsh" or "sharp" about moving off my leg. It's about being more clear. Thunder isn't behind my leg because he's lazy or naughty or stupid. Thunder is behind my leg because he doesn't know that he's not supposed to be, and the only way to fix that is to be clear. Not rude, not unkind, and not rough: but clear.

I need to be uncompromising, not necessarily towards Thunder, but towards myself. I need to be disciplined about my leg aids and about getting the response I asked for so that he understands that he needs to step away from my leg the first time, every time.
This is all part of riding each horse like a Grand Prix horse, and about putting aside my angst in order to ride this horse as well as I possibly can. Because the truth is that this is an absolutely incredible horse, a once-in-a-lifetime kind of horse. This is an ordinary mongrel who is making it into the higher levels with an inexperienced rider, and he's my hero. I cannot let something like this - something as basic as this - be the thing that stands in our way.
On Tuesday, our last ride (my schedule, ugh), I actually showed up to the party for once and I was 100% determined to have him forward off my leg with every single stride - without having to rely on the whip. Was it a little messy at times? Sure. Was it fun? Not always. When one buggers something up, it's really hard work to un-bugger it. But after going back and doing some of the lateral work exercises that always get him more quick and responsive, we returned to the Medium 2 movement we're focusing on right now: track right in collected canter, V turn right, L circle 10m, P turn left in counter canter, R flying change.
And guess what? It wasn't just good. Once he was forward, it was effortless.
My horse is an amazing horse and we are going to do the big levels together, but I have to start showing up and riding like it's more than just a pipe dream. Anything less makes him confused, tight, and unhappy in his work. I owe it to him to ride him well, and I owe it to myself and to my dreams to believe a little bit more fiercely in this thing that I was born to do.
With typically providential timing, our last church service - very much socially distanced, masked up, and sanitized, especially since we always sit up in the gallery like naughty children - was all about worship. Anyone who read the old Riding on Water knows that dressage is worship to me, a way that I can revel in and express my love for the God Who made horses and people and let them dance together. Our minister was talking about how worship is in everything we do, and that it's in doing it excellently. We worship by doing things joyously, wholeheartedly, and with our hearts fixed upon our Lord.
I used to be concerned to the point of anxiety about doing dressage well, to a point where I would feel physically sick if I couldn't get something right. The past few years have been all about reframing how I feel about dressage, letting go of my worst anxieties and even overcoming show nerves in the last few months.
Now, I'm ready to throw myself into it again with all my heart, ready to once again strive for real excellence. This time, it won't come from a place of pride or competitiveness. It'll come from a place of worship and desire for that glorious place only a horse can take us, that place where their ribs betwen our knees seem to expand with the very wind of Heaven.
I'm so ready for it. And I know my sweet bay horse can take me there, but it's up to me to show him the way.

God is so very good.

I just signed Lancey up for his first dressage show with me since... 2016? he's as incredulous as you are When I was still bringing him... 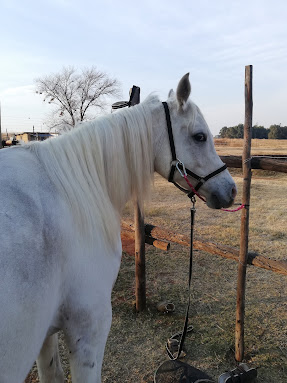